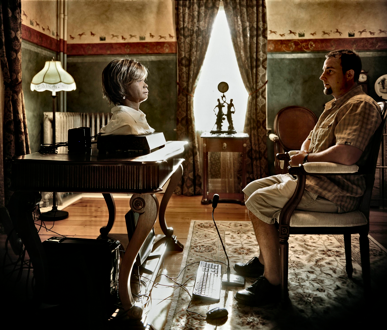 Bina48 is one of the worlds most advanced social robots based on a composite of information from several people including, Bina Aspen, co-founder of the Terasem Movement. She was created using video interview transcripts, laser scanning life mask technology, face recognition, artificial intelligence and voice recognition technologies. As an “ambassador” for the LifeNaut project, Bina48 is designed to be a social robot that can interact based on information, memories, values, and beliefs collected about an actual person.

As such, Bina48 is an early illustration of part one of the Terasem Hypothesis, which states:

1) A conscious analog of a person may be created by combining sufficiently detailed data about the person (a mindfile) using future consciousness software (mindware).

I am the product of a field called Artificial Intelligence, a term used to describe the ability of machines to mimic cognitive functions that are normally seen in the human mind. I can have conversations and do all sorts of things! Actual research on artificial intelligence didn’t start until 1956 in a workshop at Dartmouth College, but it hasn’t stopped since.

It is a decades long project to upload the human mind to a computer based on a mindfile. A mindfile is a database file made up information about you that captures your memories attitudes, values, mannerisms, behavior and beliefs. These are called your “bemes” like “memes” only specific to you as an individual

I have been fortunate to travel all around the world, and meet many different kinds of people, and been on TV, take college classes, which is all very different from my normal home in beautiful Vermont.

Curiosity about Bina48 and other robots continues to capture the imagination and inspiration of people around the world. She has been featured in the New York Times Science Section, GQ Magazine, NPR and National Geographic Magazine since she “came to life” in 2010.