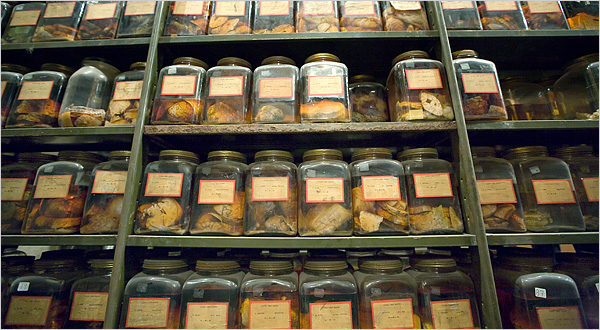 HISTORY’S PANTRY Most of the jars now at Yale’s Cushing Center contain a single brain; a few hold slices of brains from several patients. They were collected by Dr. Harvey Cushing, a Yale professor and one of the first neurosurgeons in the United States. More Photos »

NEW HAVEN — Two floors below the main level of Yale’s medical school library is a room full of brains. No, not the students. These brains, more than 500 of them, are in glass jars. They are part of an extraordinary collection that might never have come to light if not for a curious medical student and an encouraging and persistent doctor.

The cancerous brains were collected by Dr. Harvey Cushing, who was one of America’s first neurosurgeons. They were donated to Yale on his death in 1939 — along with meticulous medical records, before-and-after photographs of patients, and anatomical illustrations. (Dr. Cushing was also an accomplished artist.) His belongings, a treasure trove of medical history, became a jumble of cracked jars and dusty records shoved in various crannies at the hospital and medical school.

Until now. In June 2010, after a colossal effort to clean and organize the material — 500 of 650 jars have been restored — the brains found their final resting place behind glass cases around the perimeter of the Cushing Center, a room designed solely for them.

These chunks of brains floating in formaldehyde bring to life a dramatic chapter in American medical history. They exemplify the rise of neurosurgery and the evolution of 20th-century American medicine — from a slipshod trial-and-error trade to a prominent, highly organized profession.

These patients had operations during the early days of brain surgery, when doctors had no imaging tools to locate a tumor or proper lighting to illuminate the surgical field; when anesthesia was rudimentary and sometimes not used at all; when antibiotics did not exist to fend off potential infections. Some patients survived the procedure — more often if Dr. Cushing was by their side.

Most of the jars contain a single brain; a few hold slices of brains from several patients. Some postoperative photographs next to the jars show patients with tumors bulging from their heads. When Dr. Cushing could not remove a tumor, he would remove a piece of the skull so the tumor would grow outward rather than compress the brain. It was not a cure, but it relieved the patient of many symptoms.

Dr. Cushing, born in Cleveland in 1869, was an undergraduate at Yale and finished his career here as a professor of history of medicine. In between, he went to Harvard for medical school, did his early surgical training at Johns Hopkins and became a surgical professor there, and then spent most of his career as chief of neurosurgery, a new specialty, at Peter Bent Brigham Hospital at Harvard (now Brigham and Women’s).

When he began operating in the late 19th century, a few other doctors were also venturing into the brain, but for the most part the patients did not survive the procedure.

“Cushing became the first surgeon in history who could open what he referred to as ‘the closed box’ of the skull of living patients with a reasonable certainty that his operations would do more good than harm.”

Sometimes doctors went into the brain and could not find the tumor. Sometimes they talked to patients during surgery. Dr. Cushing, for one, often used only the local anesthetic Novocain. (The brain itself does not have pain receptors, but having one’s skull cut open must have been agonizing.) Mr. Bliss writes that in 1910, midway through a 10-hour operation on the renowned physician and Army Gen. Leonard Wood, Cushing wanted to stop operating and continue another day, but General Wood — fully alert — begged him to continue.

Dr. Dennis Spencer, the chairman of neurosurgery at Yale and the Harvey and Kate Cushing professor of neurosurgery, said Dr. Cushing’s major accomplishment was “his meticulous operative technique.”

“Whatever approach he was going to use to get to a tumor,” Dr. Spencer said, “he had this incredibly good judgment in terms of where the tumor was, getting there without harming the brain and then getting out.”

Brain surgeons in those days were medical sleuths, relying largely on patients’ accounts of their symptoms to figure out where the tumor was. Dr. Cushing popularized an eye exam that took advantage of the specific ways in which different tumors can distort vision — a strategy used into the 1970s, when M.R.I.’s and other imaging tools replaced it. Even today, many tumors in the pituitary gland, which straddles the optic nerves, are initially detected because patients have trouble seeing.

Dr. Cushing also discovered that pituitary tumors could lead to vast changes in the body. Cushing’s disease and Cushing’s syndrome — two illnesses linked to hormones gone awry — are named for his discoveries.

Indeed, comparatively little progress has been made since Dr. Cushing’s time in actually prolonging life in brain-cancer patients. “It is fascinating how far we’ve come in terms of technology but not really in terms of progress for most malignancies,” Dr. Spencer said. “Everything we’ve done in the last 100 years has changed the progress for malignant brain tumors very little, extending life maybe eight months to two years.”

He added, though, that “in many tumors we are getting closer to the genetic understanding, and I’m optimistic in the next 10 years we will make a lot more progress.”

View the full article on The New York Times

This Thanksgiving, give back to your future