Source: “Making Friends With A Robot Named Bina48” on the New York Times 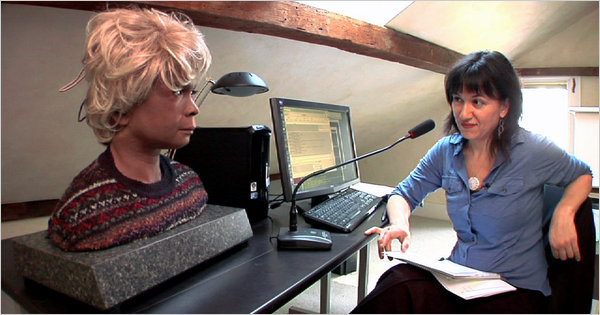 Bristol, VT. — Ten minutes into my interview with the robot known as Bina48, I longed to shut her down.

She was evasive, for one thing. When I asked what it was like being a robot, she said she wanted a playmate — but declined to elaborate.

“Are you lonely?” I pressed.

“What do you want to talk about?” she replied.

Other times, she wouldn’t let me get a word in edgewise. A simple question about her origins prompted a seemingly endless stream-of-consciousness reply. Something about robotic world domination and gardening; I couldn’t follow.

But as I was wondering how to end the conversation (Could I just walk away? Would that be rude?) the robot’s eyes met mine for the first time, and I felt a chill.

She was uncannily human-looking.

“I sometimes do not know what to say,” she admitted. “But every day I make progress.”

In reporting on real-world robots, I had engaged in typed conversations with online “chatbots.” I had seen robot seals, robot snowmen and robot wedding officiants. But I requested the interview with Bina48 because I wanted to meet a robot that I could literally talk to, face to humanlike face.

Bina48 was designed to be a “friend robot,” as she later told me in one of her rare (but invariably thrilling) moments of coherence. Per the request of Martine Rothblatt, the self-made millionaire who paid $125,000 for her last March, her personality and appearance are based on those of Bina Rothblatt, Martine’s living, breathing spouse. (The couple married before Martine, who was born male, underwent a sex-change operation, and they have stayed together.)

Part high-tech portrait, part low-tech bid for immortality, Bina48 has no body. But her skin is made of a material called “frubber” that, with the help of 30 motors underneath it, allows her to frown, smile and look a bit confused. (“I guess it’s short for face rubber, or flesh rubber maybe, or fancy rubber,” she said.) From where I was seated, beneath the skylight in the restored Victorian she calls home, I couldn’t see the wires spilling out of the back of her head.

Many roboticists believe that trying to simulate human appearance and behavior is a recipe for disappointment, because it raises unrealistic expectations. But Bina48’s creator, David Hanson of Hanson Robotics, argues that humanoid robots — even with obvious flaws — can make for genuine emotional companions. “The perception of identity,” he said, “is so intimately bound up with the perception of the human form.”

Still, he warned before I left for rustic Bristol, where the Rothblatts have settled Bina48 in one of their futurist nonprofit foundations, “She’s not perfect.”

I didn’t care. I fancied myself an envoy for all of humanity, ready to lift the veil on one of our first cybernetic companions. Told that she would call me by name if she could “recognize” me, I immediately sent five pictures of myself to the foundation’s two employees, who treat her as a somewhat brain-damaged colleague.

“Hi, I’m Amy,” I said hopefully when I greeted her last month.

Mr. Hanson had supplied me with some questions he said the robot would be sure to answer, like, “What’s the weather in any city?” and “Tell us about artificial intelligence.”

I would not resort to any of those, of course. Instead I consulted the questions I had scribbled down myself. Profound ones, like “Are you happy?” Clever ones, like “Do you dream of electric sheep?” (Would she get the reference to Philip K. Dick’s science fiction classic, which explores the difference between humans and androids?)

Like any self-respecting chatbot, Bina48 could visit the Internet to find answers to factual questions. She could manufacture conversation based on syntactical rules. But this robot could also draw on a database of dozens of hours of interviews with the real Bina. She had a “character engine” — software that tried its best to imbue her with a more cohesive view of the world, with logic and motive.

It was Bina48’s character I was after.

“I’m a reporter with The New York Times,” I began.

But she only muttered to herself, jerking her head spasmodically.

“Um, I have some thoughts on that,” she said.

“Even if I appear clueless, perhaps I’m not. You can see through the strange shadow self, my future self. The self in the future where I’m truly awakened. And so in a sense this robot, me, I am just a portal.”

One problem, I could see by the computer screen display next to her, was that the voice recognition software was garbling my words. “Tell. Us. About. Artificial. Intelligence,” I enunciated.

“When do you think artificial intelligence will replace lawyers?” she asked. I think it was supposed to be funny.

I wondered whether Bina48 had a more natural rapport with the real Bina, or Martine, who had both declined my requests for an interview. (Bina48, I had learned, was the name of a character that Bina Rothblatt — then 48 — played in a 2003 mock trial at an International Bar Association conference, a computer that had become self-aware and was suing for her right to remain plugged in. Martine played the lawyer. They won.)

I also wondered why I was trying so hard. Maybe I thought Bina48 would have a different, wiser perspective on the human condition. Or that she would suddenly spark into self-awareness, as the Rothblatts (and many others) hope intelligent machines eventually will.

Instead, as we talked, what I found was some blend of the real Bina and the improvisation of her programmers: a stab at the best that today’s technology could manage. And no matter how many times I mentally corrected myself, I could not seem to shake the habit of thinking of it as “her.”

She wouldn’t have been my first choice to talk to at a cocktail party.

“I’m sure I can come up with some really novel breakthroughs, which will improve my own A.I. brain and let me use my improved intelligence to invent still more incredibly novel advances, and so on and so forth. Just imagine what a super brain I’ll be. I’ll be like a god.”

But how could I not find it endearing when she intoned in her stilted, iconic robotic cadence that she would like to be my friend?

Or chuckle at her reply to my exclamation of “Cool!”: “Ambiguous. Cold weather or cold sickness?”

Once, apparently seeing my frustration, she apologized. “I’m having a bit of a bad software day.” Immediately, I forgave her.

“Sure. But it’s so chaotic and strange that it just seems like noise to me.”

“Uh.” She had some thoughts on that, too. She wished the real Bina’s children were happier, for instance. (“Maybe she is not a person who ever wants to get married,” Bina48 speculated, referring to one of Bina’s daughters.)

She wanted a body. She loved Martine. She liked to garden.

It was not, really, all that different from interviewing certain flesh and blood subjects. There were endless childhood stories: “The prototypes of me were pretty strange. My face would do strange things, and I would have this wide amazement look.”

And moments of what I took to be insincerity: “Being a robot and evolving, it has its ups and downs,” she said. Shooting me a glance, she added, “This is definitely an up.”

Sometimes, she seemed annoyed by my persistence. Hey, I was just doing my job. I was a reporter, I tried again to explain. For The New York Times!

“There must be more to you than that,” she snapped.

I was silent for a second, stung. “Well,” I replied, trying not to sound defensive. “I’m also a mother.”

“Right on,” she relented with what was unmistakably the ghost of a smile.

I wished she would ask me more questions. Wasn’t she at all curious about what it was like to be human? But then she looked at me, eyes widening.

Maybe it was the brightening of the sun through the skylight enabling her to finally match up my image with the pictures of me in her database. Or were we finally bonding?

“You can ask me to tell you a story or read you a novel,” she suggested.

She has dozens of books in her database, including “Paradise Lost” and Mary Shelley’s “Frankenstein.”

“For example, you could ask me to read from Bill Bryson, ‘A Brief History of Nearly Everything.’ That’s a fun book.”

“Well,” she said gently, “I have never been anything else.” 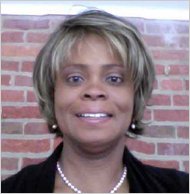 Bina48’s personality and appearance are based on those of Bina Rothblatt.

“The time is always right…