LifeNaut Notes: One of the questions people think about when contemplating human avatars in the future is power. If there is a substitute to the human body, presumably robotic in some fashion, it will need a source of power. Here’s a great article from Science Daily
about a new technology that uses a series of tiny pulsating structures that mimic the hairs that line the human windpipe. These are arranged in rows along the underside of the robot and will help to generate thermal power as the robot crawls along. Check out the article below. 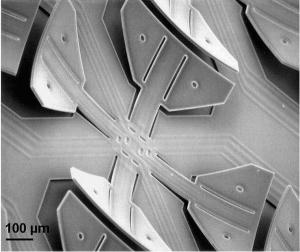 The past few years have given rise to a growing number of microrobots, miniaturized mobile machines designed to perform specific tasks. And though spectators might need magnifying glasses to see the action, some think the time has come for a microrobotics challenge.

“I’d like to see a similar competition at the small scale, where we dump these microrobots from a plane and have them go off and run for days and just do what they’ve been told,” said Karl Böhringer, a University of Washington professor of electrical engineering. “That would require quite an effort at this point, but I think it would be a great thing.”

Researchers at the UW and Stanford University have developed what might one day be a pint-sized contender. Böhringer is lead author of a paper in the June issue of the Journal of Microelectromechanical Systems introducing an insectlike robot with hundreds of tiny legs.

Compared to other such robots, the UW model excels in its ability to carry heavy loads — more than seven times its own weight — and move in any direction.

Someday, tiny mobile devices could crawl through cracks to explore collapsed structures, collect environmental samples or do other tasks where small size is a benefit. The UW’s robot weighs half a gram (roughly one-hundredth of an ounce), measures about 1 inch long by a third of an inch wide, and is about the thickness of a fingernail.

Technically it is a centipede, with 512 feet arranged in 128 sets of four. Each foot consists of an electrical wire sandwiched between two different materials, one of which expands under heat more than the other. A current traveling through the wire heats the two materials and one side expands, making the foot curl. Rows of feet shuffle along in this way at 20 to 30 times each second.

“The response time is an interesting point about these tiny devices,” Böhringer said. “On your stove, it might take minutes or even tens of minutes to heat something up. But on the small scale it happens much, much faster.”

The legs’ surface area is so large compared to their volume that they can heat up or cool down in just 20 milliseconds.

The microchip, the robot’s body and feet, was first built in the mid 1990s at Stanford University as a prototype part for a paper-thin scanner or printer. A few years later the researchers modified it as a docking system for space satellites. Now they have flipped it over so the structures that acted like moving cilia are on the bottom, turning the chip into an insectlike robot.

“There were questions about the strength of the actuators. Will they be able to support the weight of the device?” Böhringer said. “We were surprised how strong they were. For these things that look fragile, it’s quite amazing.”

The tiny legs can move more than just the device. Researchers were able to pile paper clips onto the robot’s back until it was carrying more than seven times its own weight. This means that the robot could carry a battery and a circuit board, which would make it fully independent. (It now attaches to nine threadlike wires that transmit power and instructions.)

“If you drive a car and you want to be able to park it in a tight spot, you think, ‘Wouldn’t it be nice if I could drive in sideways,'” Böhringer said. “Our robot can do that — there’s no preferred direction.”

Maneuverability is important for a robot intended to go into tight spaces.

The chip was not designed to be a microrobot, so little effort was made to minimize its weight or energy consumption. Modifications could probably take off 90 percent of the robot’s weight, Böhringer said, and eliminate a significant fraction of its power needs.

As with other devices of this type, he added, a major challenge is the power supply. A battery would only let the robot run for 10 minutes, while researchers would like it to go for days.

Another is speed. Right now the UW robot moves at about 3 feet per hour — and it’s far from the slowest in the microrobot pack.

The above story is reprinted (with editorial adaptations by ScienceDaily staff) from materials provided by University of Washington.